Hey to all of you that survived the rapture! So here is the follow-up post I talked about earlier this week. It's going to be nothing but trade bait pictures. (Click on each set to see them full sized.) If you see something you like leave a comment or shoot me an e-mail with your offer(s). I'm mainly looking for Royals and Vikings cards for sports and will entertain any non-sport offers as well. I will cross trade as also (sketch card for sports card for example) Don't be shy about any offer the worst thing I can say is no and I probably won't say that too much! I just have stuff that doesn't do me any good but others might like. Thanks again for stopping in and until later.... ciao! 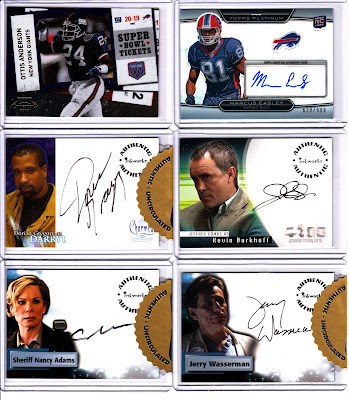 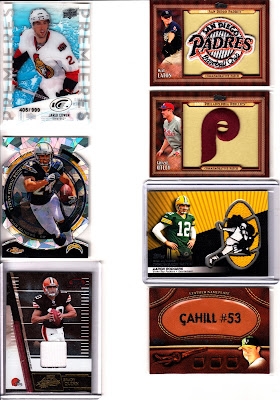 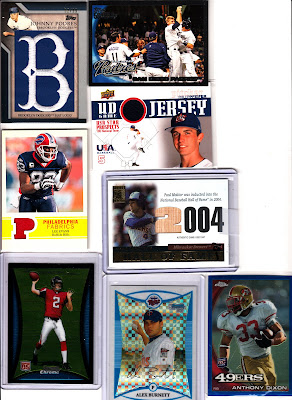 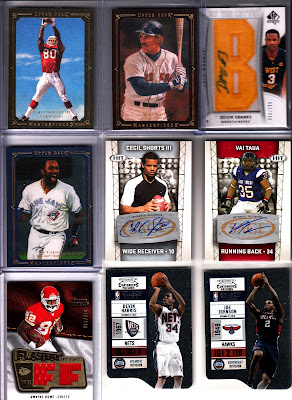 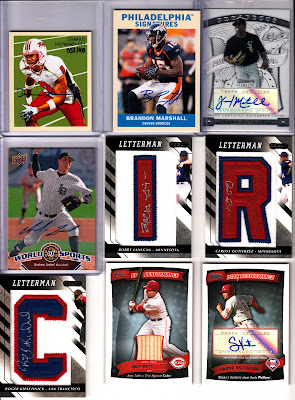 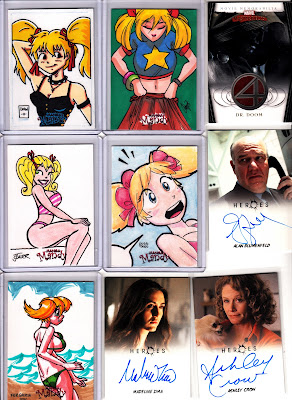 Any questions just ask as well!
Posted by darkship at 12:34 AM 8 comments:

So I haven't had anything to post here recently and I don't know if anybody still stops by but I finally have a few updates to share. After not being able to purchase much in the last couple months I finally got a few extra funds and spent some of it on cards. I stopped at "The Rookie" and grabbed several packs of SP Authentic basketball, Press Pass Premium and his last box of Star Wars Galaxy 6. I did well, the worst of the lot was actually the one I had hoped would be the best, the Galaxy 6. As I mentioned before a lot of the boxes were yielding two or more sketches, mine did not. I had only one sketch, a nice ink sketch of a Dianoga by Brent Engstrom. 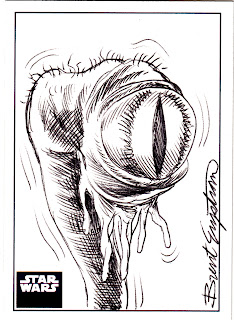 The Press Pass included one of the 3-D cards and one autograph of Juan Pablo Montoya numbered 48/161. (THis is a really bad scan as the card is mainly foil) 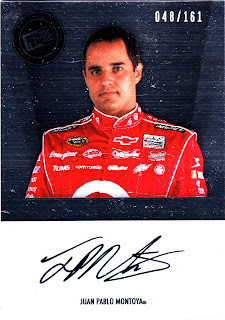 The SP Authentic came out of a fresh box and I got two hits off six packs. Firstly was a By the Letter of Devin Ebanks and second was one of the North Carolina Michael Jordan floor pieces. It's the common version but looks really cool next to my Jordan autograph. All told not a bad day at the shop! 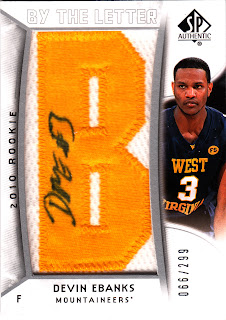 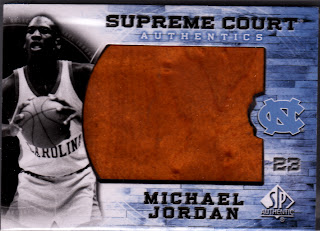 I have won several card off E-bay as well. The first is an Artist Exclusive from the 5finity Sheena set by one of my favorite artists Amber Stone. 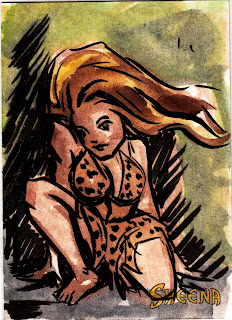 I also picked up a couple Royals autographs. One is a 2007 UD Exquisite rookie of Alex Gordon and the other is a UD Premier of Alex Gordon and Luke Hochevar. Both were under $20 and I feel were great pick ups. Alex has been playing better since being switched to the outfield and Luke has been a bright spot on the pitching staff this year after being the opening day starter. 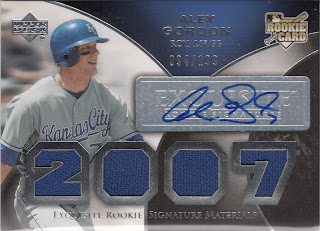 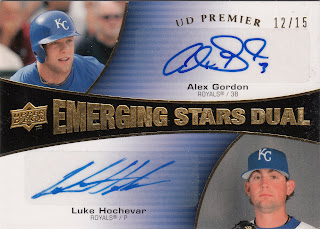 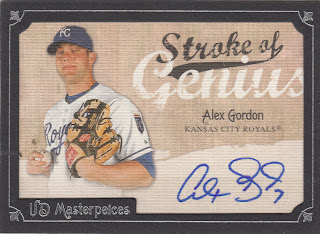 The last card was a pick up from Jeff at I Am Joe Collector and his Masterpieces case binge. Alex was a short print autograph and at one time was selling at over $60. I didn't pay nearly that much and thank Jeff for passing one my way.

I also got into touch with my favorite Star Wars artist Shea Standefer and was able to purchase two of her return cards. One each from Galaxy 5 and 6. The Galaxy 5 card she's had finished since the set came out and I'd been bugging her from time to time about getting it. It's a beautiful full color of Star Wars Legacy character Deliah Blue. 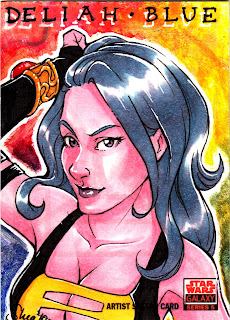 The Galaxy 6 card was a blank and Shea let me pick my own character and scene. One of my favorite Extended Universe series is the Republic Commando series by Karen Travis. These books focus mainly on the clone troops but have a few Jedi that they work with one of them being Jedi Etain Tur-Mukan. Shea has a couple sketches of her floating around somewhere but I wanted one for myself and had her do a full color of her holding her son Kad and protecting him with her lit lightsaber. It came out better than I could have hoped for..... 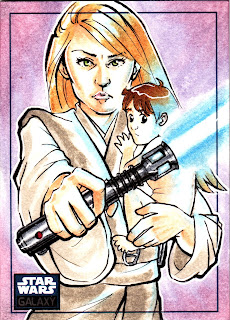 I'll have another post going up in the next day or so with a bunch of cards for trade. I'll mainly be looking for Royals in return so if you have any be on the lookout for that post. Hope somebody is still checking in here every once and a while, if you are thanks and until the next post ciao!
Posted by darkship at 12:13 AM 4 comments:

Congratulations to the Royals rookie reliever Aaron Crow on getting his first win of the season!!

Dimwit is holding a group break of two boxes of the upcoming Topps Gypsy Queen. Click here to see the remaining teams. If all teams are taken he is adding an extra box of something. These last few teams are also discounted to $10.00 each. Join the fun and help us check out this new product!
Posted by darkship at 9:38 AM No comments:

As some of you may have noticed my banner as changed recently. This is due to a recent opportunity given to me by the web site and design company Build a Sign. Since I don't get the chance to open free boxes for review I took the offer and made three different designs sponsoring the blog in different ways. I was able to create a 3'x6' banner, a regular bumper sticker and a magnetic bumper "sticker" that will allow me to give some away.

The design process was really fun. I just had to remember that when layering pictures and text to start from the bottom up! For the banner I wanted something that I could possibly use a local card shows as I've been thinking about setting up to try and get rid of some of the thousands of singles I have. I wanted to show what types of cards I collect the most and think I accomplished this in the different pictures on either side of the picture of Iowa. The blog name and the web address are, of course, at the top and bottom and the star in the middle of the state show approximately where I'm located. You'll see this on one of the other designs as well. I think the banner looks great. It's heavy duty and has metal rings on the corners to help with the displaying. 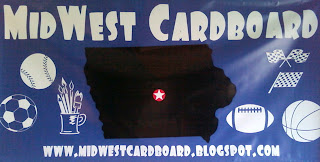 The bumper sticker I did was partially taken from a design that was already on the site as a template. The only things I changed were the colors and what I'd rather be doing. It's a simple saying that has SOOO much truth to it! I have several of these to give away so if you're interested let me know.

The last item is the bumper magnet that once again features my home location but also gives you an idea on how long I've been collecting. These magnets are really nice. Thick and strong magnet makes them perfect for the back of your car and the printing is easy to read. I didn't get too many of these but have a couple to give out if you like this design better, so give me a shout.

Build a Sign is a great company to work with. Looking at their prices they seem very reasonable and I may have to go back and see what else I can mock up for future use. The design template is fun to work with and you can use clip art that they have on site or you can import your own pictures for use. If you have questions I worked with Megan and she is great. I had her look at all me ideas and she made one change but that was to conform the design to a different template. Thanks again to Build a Sign for their sponsorship!
Posted by darkship at 3:07 PM No comments:

Pick-Ups Off A Tip-Off

While reading Dennis' blog recently he mentiond that one of his favorite sellers on the Blowout Forums was having a great sale on his game used and autographed cards in his $2.50 folders. This sounded like it might be promising and I proceeded to see what I could find. There wasn't much in those two folders that interested me but I did see he had some really nice breakdowns of higher end cards. I dove into the folder containing the Vikings and went broke. Well maybe not broke but it would have been really easy!! I limited myself this time to some nice PC stuff. I started with the 1st round draft pick from 2006 who is quickly becoming one of the best linebackers in the NFL Chad Greenway. And for those who don't know Chad attended the University of Iowa so that makes him a great home state player to collect. I picked up three rookie autographs for my collection. 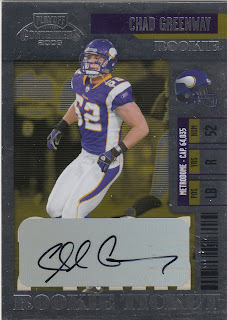 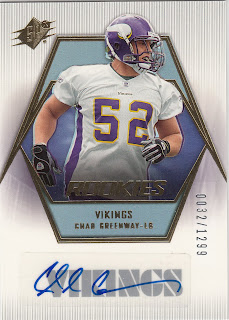 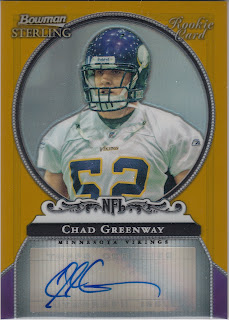 All three great cards. My favorite is probably the Contenders as it's the best picture but the Sterling is a close second. It's kinda fun to own the very first autograph in the series and the gold card looks great with the Vikings uniform.

The last card I picked up is a 2009 Certified of Percy Harvin. It's a bit of a gimmick and I won't deny that one bit but I really like it and got it at a great price. 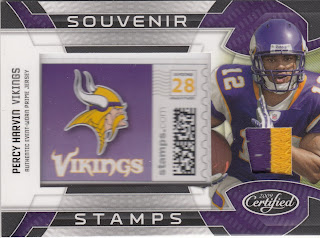 I have a couple of the stamp/patch/autographs in my collection but this makes my first Percy Harvin jersey or patch card. The Vikings stamp is a nice touch as well. So there you have it, short and sweet. I'll post the link to the Blowout Forum for those who would like to try and make a deal as well. For now enjoy March Madness..... ciao!

Topps recently came out with its newest offering in the Galaxy line, number 6. When it was first announced there was a lot of skepticism about what most of the collectors go after, the sketch cards. Some of the cards for Galaxy 5, ESB 30 and the Clone Wars were shall we say less than stellar. This happens with a fair share of releases and not just with Topps but history has shown that buyers can get burned from time to time. However when people started getting their Galaxy 6 cases and boxes and started opening them we quickly realized that Topps wasn't fooling around this time. A normal box has one sketch and case will include one or two die-cuts and maybe a printing plate. What people were finding was two or three sketches a box and as many as 18 or 19 hits a case, WAY more than normal. Prices immediately went through the roof. Boxes went from $50 up to over $100 and cases that pre-ordered at $500 pushed $1000. I wasn't able to pre-order anything but this time wanted to save my money and just buy the cards I wanted, hopefully saving me a little money in the process. The main cards I'm after are by one of my favorite artists Shea Standefer. She continued her depiction of Extended Universe characters for Galaxy 6 and I can't get enough. Here are a couple of my favorites I've picked up so far. 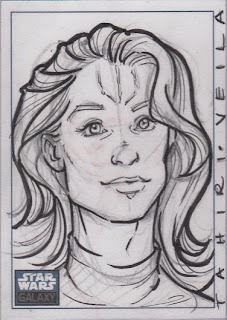 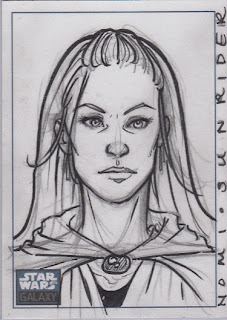 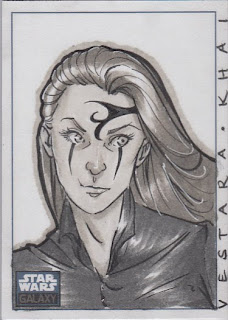 I did find that my card shop owner had ordered a case and this last weekend I bought two boxes from him hoping to get a good card or two. I'll let you guys decide....... 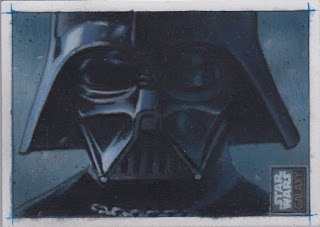 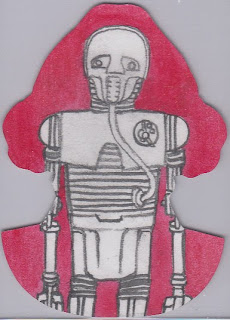 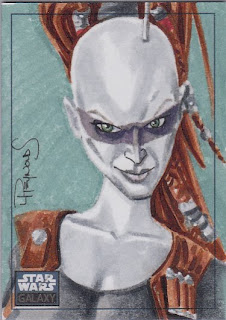 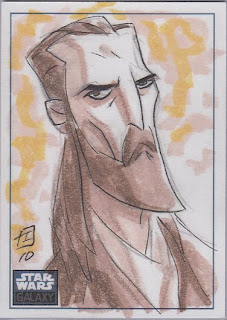 Qui-Gon Jinn by Otis Frampton
Me personally, I'm thrilled. Box one was the killer box as the Vader was in the very first pack I opened! My original goal was to sell any sketches I pulled to buy one I really want but I'm having a hard time as these are some of the best I've pulled from a Star Wars product. I may have to track a few prices and see what I might be able to get, and if someone makes me one of those offers I can't refuse I won't say no. But for now I'm going to hold onto them and see what happens.
Posted by darkship at 2:06 PM No comments: